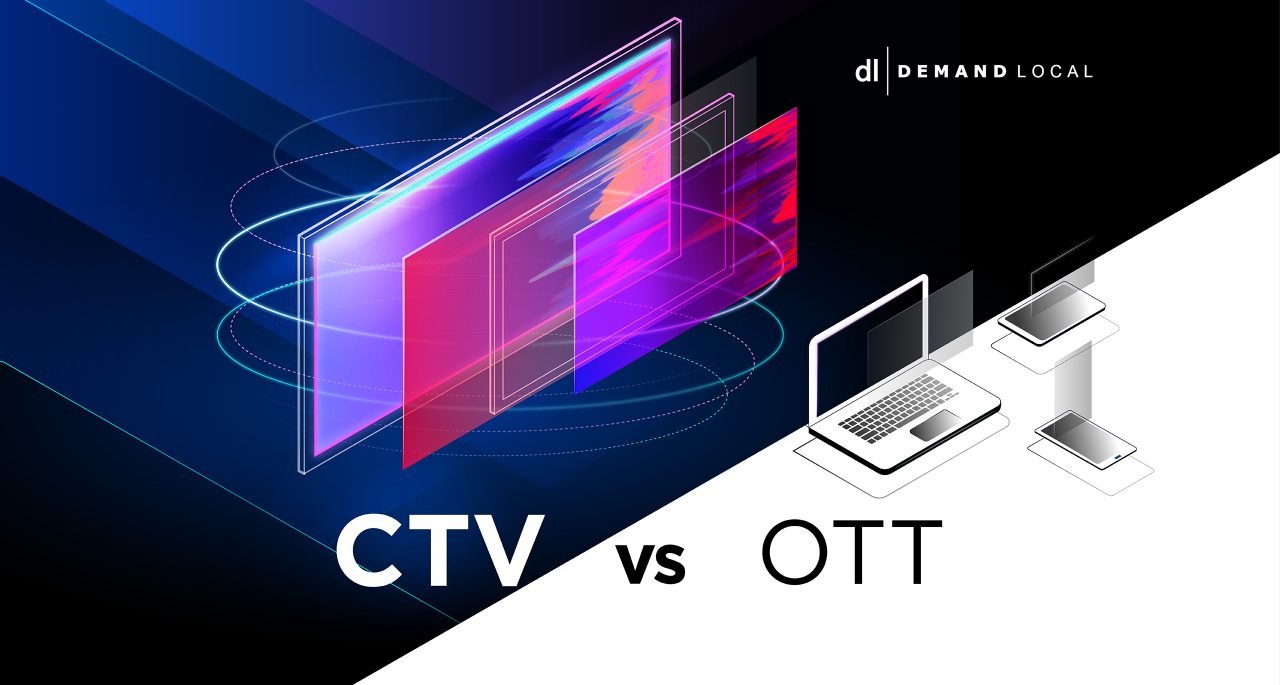 According to one recent study, cord-cutting – that is, giving up cable television and similar services – has increased by a massive 48% in the last eight years alone. But that doesn’t mean that people are watching less TV – they’re actually watching more of it than ever.

Consumption habits haven’t changed – the technology that delivers that content has just evolved exponentially. As a marketer, you need to be able to take full advantage of this trend – and CTV and OTT advertising are how you do it.

What Are the Major Differences Between OTT and CTV?

Generally speaking, CTV and OTT are typically used interchangeably because

A) they’re both acronyms!
B) they’re directly related to two admittedly similar but very different concepts.

OTT is short for “over the top,” and it’s referring to any video content that is streamed by a user directly from the Internet. This can happen on a desktop or laptop computer, or on a smartphone, tablet, or other types of mobile devices. Every year, more people make the jump to OTT services like Netflix and Hulu and away from the traditional cable television subscription model. Thanks to not only its convenience and ease-of-use but the wide range of content that is available.

CTV, on the other hand, stands for “connected TV.” This refers to a device that is connected to a television, and that has an active Internet connection. Apple TV and Roku are likely the two most famous examples of this type of device today.

So while you may use a CTV device to stream OTT content, they are not the same thing and should never be treated as such.

CTV vs OTT for Marketers: Breaking Things Down

The significant differences between CTV and OTT really start to reveal themselves as you venture into the topic of marketing and digital advertising.

Over the top Advertising, for example, are usually shown before, during or even after watching a particular piece of content. It’s similar to the experience that you get when you load a video to watch on YouTube. Before your selected video plays, you’re usually greeted with a short advertisement that can be skipped after about five seconds. You may see another ad somewhere during the content itself, and there might even be another one at the end.

Connected TV advertising is similar, but also different in a number of ways. CTV ads can play on the devices themselves, thus giving savvy marketers the ability to reach out and connect with members of their target audience regardless of the content those users have selected.

The prime benefit of Connected TV over OTT video advertising is the audience quality. They are the most engaged and vested audience among all of over the top media, and mostly view content using a paid subscription. With CTV Advertising you can handpick the publishers you want to target from private marketplaces and display your ads alongside premium content — the most popular TV shows and movies.

Ads can appear not only on the aforementioned Roku device but also on hardware options like Sony’s PlayStation 4 game console, Chromecast, AndroidTV, and others.

CTV Ads is a big shift for Marketers

CTV Ads give marketers the ability to focus on specific groups of audience members with a greater degree of precision, thus increasing engagement levels across the board. CTV marketing allows brands to take advantage of not only particular personas but also characteristics like age and gender, income levels, household properties, intent information and more.

CTV ads give marketers the ability to focus on specific groups of audience members with a greater degree of precision, thus increasing engagement levels across the board. Click To Tweet

Brands can use both first and third-party data to reach their most valuable audiences on EVERY screen, not just on particular platforms. Furthermore, the data and analytics that this level of smart TV advertising brings with it allow for far better and more accurate measurement in terms of tracking the impact of your CTV campaigns as well.

But where CTV marketing really shines has to do with the ways in which it allows for far smarter retargeting than ever before. The chances are high that your average customer probably owns more than one CTV device or “smart” television in their home. Not only has second screening become the new norm, but another recent study estimated that as many as 45% of Americans use their mobile devices or tablets WHILE also watching television. 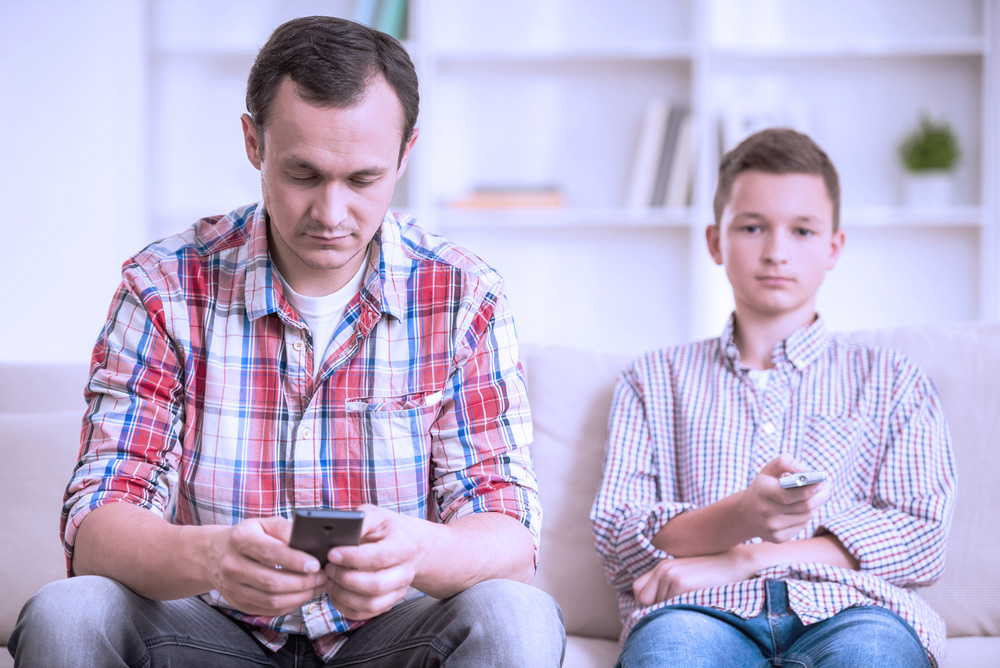 So not only do you get the opportunity to regularly re-engage with viewers as they continue to watch new content, but you can do so across the various streaming devices in their household, too. You can begin a relationship with a viewer on their mobile phone and continue it as they move to their tablet, to their desktop computer and even to their TV itself.

CTV marketing allows brands to take advantage of not only particular personas but also characteristics like age and gender, income levels, household properties, intent information and more. Click To Tweet

None of this is to say that OTT isn’t important – again, it’s one of the most exciting technological trends to come along in possibly a generation or more. It’s just that in terms of better, and more informed marketing efforts, Connected TV ads bring with them a host of unique benefits that most brands simply cannot afford to ignore.

Think about it like this: OTT is the admittedly large umbrella under which CTV falls. But if OTT is a nice glass of beer, CTV is like a fine scotch. The former is refreshing, but the latter commands respect and brings with it a cache you can’t get elsewhere.

If you’d like to find out more information about the major differences between CTV and OTT marketing, or if you have any additional questions you’d like to discuss with someone in a bit more detail, please don’t delay – contact us today.

If you stream Amazon Prime on your phone and watch it via airplay on your TV, Would it be CTV or OTT?
Email us your thoughts and answers to contact@demandlocal.com. 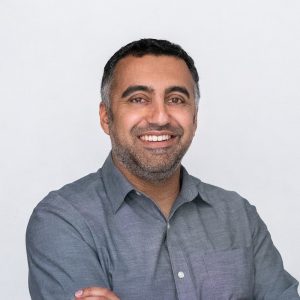 Ray Bhatia is CEO and Co-Founder at Demand Local, a San Francisco based online marketing firm dedicated to helping automotive companies connect with customers on the internet. Before founding Demand Local in 2008 with Mike Machado, Ray managed the product development of search engine marketing, ad serving, and analytics platforms for both QuinStreet, Inc and LookSmart Ltd. At OnStation (later acquired by Cobalt), he helped bring the latest internet marketing technologies to automotive dealers across the country. Ray graduated from the University of California, Berkeley with a degree in both Physics and Astrophysics. He is currently based in San Francisco, CA.